Global financial markets had mixed performances in October.  Investors were hoping for another tranche of stimulus from Washington, but the politicians were too far apart to get a deal done in the end.  The US Presidential election continued to loom, and the numerous uncertain outcomes in the election provided a reason to reduce risk in some model portfolios.  Increased infection rates across the globe, mainly in Europe, dampened economic recovery expectations.  Progress on a Covid-19 vaccine was encouraging but not without some setbacks.  3rd quarter earnings also rolled in with varied results, which resulted in some very dramatic individual stock moves. 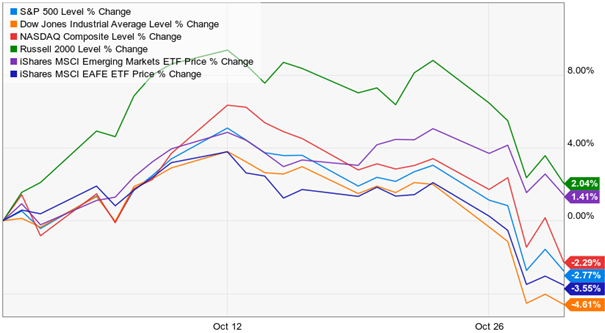 Uncertainty about the upcoming election, along with contentious negotiations on another tranche of stimulus, was top of mind for US investors throughout October.  Election polls had Biden in the lead for most of the month but with a lead less than the tracking error.  Wall Street strategists penned notes handicapping what each political outcome could mean for the markets but often provided differing opinions.  In front of the election, political posturing had both sides saying they were willing to negotiate a new fiscal stimulus plan. Still, the two sides were too far apart and unwilling to give up something that could upset their constituents.  It is clear that the economy needs another round of stimulus, and it will likely get another dose; however, the timing of a deal is anyone’s guess. 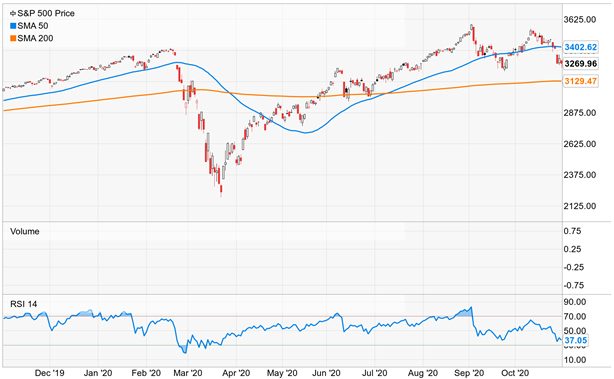 Corona Virus infections increased over the month and topped 90k per day in the US.  In Europe, locally oriented lockdown measures have been replaced by national lockdown mandates.  Italy, Spain, Germany, France, and the UK have all implemented these new measures, putting pressure on European markets.  A path to a Covid-19 vaccine has made material progress with many trials in late stages.  However, the progress does come with some setbacks.  Several trials were postponed for different reasons, but some of these trials have been restarted.  The process will continue to be two steps forward one step back until we have a successful vaccine.  Elsewhere the treatment of the virus has become much better over time, and the use of Gilead’s Remdesvir received FDA approval.  Similarly, we saw Regenoron’s antibody cocktail show promising results in fighting the virus.

3rd quarter earnings continue to come in. With just over 64% of the S&P 500 companies having reported, Factset reports that 86% of those have reported better than expected earnings per share, and 81% have reported better revenues.  At the beginning of the month, companies were rewarded for their better than expected results, but it was quite the opposite in the final week of the month.  Mega-cap technology companies such as Apple, Facebook, and Amazon reported solid numbers last week only to see their share prices lower after the announcement.  Perhaps the results had already been reflected in the price gains seen earlier in the month.  All in, not a bad earning season.

The information in this Market Commentary is for general informational and educational purposes only. Unless otherwise stated, all information and opinion contained in these materials were produced by Foundations Investment Advisers, LLC (“FIA”) and other publicly available sources believed to be accurate and reliable.  No representations are made by FIA or its affiliates as to the informational accuracy or completeness.  All information or ideas provided should be discussed in detail with an advisor, accountant or legal counsel prior to implementation. No party, including but not limited to, FIA and its affiliates, assumes liability for any loss or damage resulting from errors or omissions or reliance on or use of this material.

The views and opinions expressed are those of the authors do not necessarily reflect the official policy or position of FIA or its affiliates.  Information presented is believed to be current, but may change at any time and without notice.  It should not be viewed as personalized investment advice. All expressions of opinion reflect the judgment of the authors on the date of publication and may change in response to market conditions. Due to rapidly changing market conditions and the complexity of investment decisions, supplemental information and other sources may be required to make informed investment decisions based on your individual investment objectives and suitability specifications. You should consult with a professional advisor before implementing any strategies discussed. Content should not be viewed as an offer to buy or sell any of the securities mentioned or as legal or tax advice. You should always consult an attorney or tax professional regarding your specific legal or tax situation. Investment advisory services are offered through Foundations Investment Advisors, LLC, an SEC registered investment adviser.